An essential part of Ivan Weiss' works are created in a charcoal oven, a small 2 mᶟ chamber-oven, based in Royal Copenhagen Porcelain Manufactory. The oven was capable of firing ceramics in lower temperatures around 1300 ºC, and was useful to fire Chinese glazes as Celadon, Olivine and Oxblood (the bowls shown above are Oxblood). Firing in a charcoal-oven was demanding, because it had to be completely sealed before use and continuously fired with coal. The Charcoal-oven was closed in 2007, when Royal Copenhagen moved their manufactory from Frederiksberg to Glostrup.

Ivan Weiss' ceramic trademarks are among others the following glazes Oxblood, black and blue Olivine and Celadon. The glazes are famous for being able to make an organic texture and silky surface, which occurs mainly from the firing process at about 1300 °C and a slow cooling, that influences on the final visual expression.

Oxblood Glaze contain a high amount of copper and is known for its deep red color. Celadon-glaze and Olivin-glaze share some essential features. Celadon-glaze contain a small amount of iron that results in colors from bluish green, olive green to brownish green, while Olivin contain a lot of magnesium iron-silicates, resulting in a green, brown and black dyes in the glaze. Oxblood origins from Chinese porcelain from the Ming Dynasty (1368-1643), while Celadon and Olivine are found back in the Sung-dynasty (960-1279).

"The attractiveness of oxblood is linked to the drama it produces. The flaming red surface and deepened reliefs provides an important contrast to the bright-colored edges, from where the glaze runs during firing. The green spots, created by the variations of the firings temperature and reduction degree, creates an additional playful expression in the glaze." 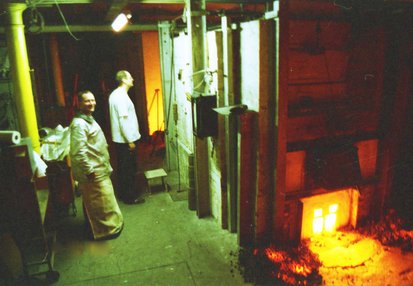 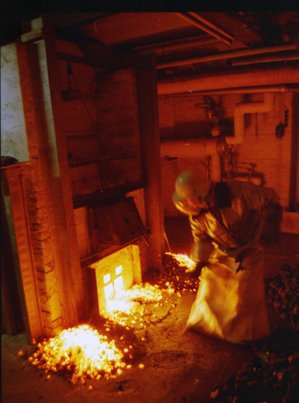